Instead of telling a story through words and sounds, photojournalists tell the story through images.  Nowadays, photos in a newspaper are attention-grabbing and timely because of the development of photographic technology and the Internet.  We have all the possible access points for getting photos, but are we using them ethically?

Take into consideration these controversial photos: 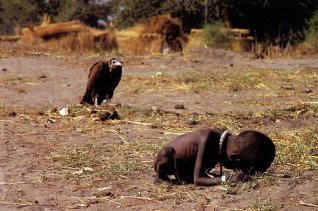 In March 1993, photographer Kevin Carter made a trip to southern Sudan, where he took the now iconic photo of a vulture preying upon an emaciated Sudanese toddler near the village of Ayod.©1993  Kevin Carter

Kim Phuc was 9 years old in 1972 when she was photographed, screaming in pain, after a U.S. commander ordered South Vietnamese planes to drop napalm near her village. © 1972 Nick Ut.

The image captures the moment a uniformed South Vietnamese officer fires a bullet into the head of a man who appears to be a civilian. ©1968 Eddie Adams

In the Code of Ethics of the National Press Photographers Association (NPPA) website members write, “As visual journalists, we have the responsibility to document society and to preserve its history through images.”

However, it is easy to let your emotions get in the way when telling the truth. “One person’s historical document is another’s inflammatory propaganda,” said John Long, the Ethics Committee Chair of NPPA.

Two of the widely discussed issues in photojournalism these days include the topless photos of Princess Kate and the photo of dead ambassador Chris Stevens in Libya.

Frankly, these photos are accurate depictions of what was happening in front of the camera at that time. But can these photos be regarded as news photos? Before the public sees these images, the photojournalists and the editors should think this question over: does the public need to see Ambassador Chris Stevens being dragged through the streets when he was either dead or dying, in order to know what was going on? Or is it just to stir up the emotions of the viewers?

After looking at the old photos in which an American soldier was being dragged through the streets of Mogadishu in the Somali capital, can readers tell the difference from these two pictures? Even though in Somalia it was a mob defiling an American, and in Libya it was a group trying to help the ambassador.

If you want to understand the photojournalist’s ethical framework, a code from NPPA might help you:

“Treat all subjects with respect and dignity. Give special consideration to vulnerable subjects and compassion to victims of crime or tragedy. Intrude on private moments of grief only when the public has an overriding and justifiable need to see.”

This entry was posted in Journalism and tagged Code of Ethics, Ethics, Journalism, Photojournalism. Bookmark the permalink.