Posted on November 9, 2015 by Leland Orfield

Joanne Bland, a civil rights activist who has been involved in the movement since the 1960s, spoke to an audience at Schofield Auditorium on Monday Oct. 12 about her experiences with activism and about the importance of continuing the pursuit of civil liberty. 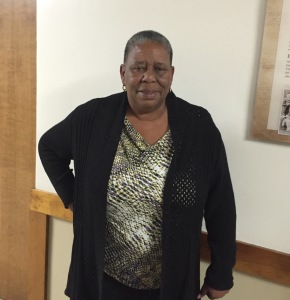 Joanne Bland, civil rights activist and co-founder of the National Voting Rights Museum and Institute, speaks to and answers questions from the audience in Schofield Hall. (Photo ©Leland Orfield)

“Movements of social change are like jigsaw puzzles: Everybody has a piece,” said Bland. “If your piece is missing, then the picture is not complete. I want you to think that your piece is the most important piece in the whole puzzle, because it completes the picture.”

Bland’s strong, vital presence in the room gathered a serious attention from the audience, which was composed of 140 people, according to organizers at the event.

In her speech, Bland outlined the struggles she has faced in her life involving her goal in advocating for social justice. She introduced the audience to the pain she has felt through the story of the death of her mother, who wasn’t able to receive the medical attention she needed because of the segregation of black and white hospitals at the time.

The pains in her childhood caused by racial division inspired Bland at a young age to become an activist in her community of Selma. A group called the The Student Non-Violent Coordinating Committee (SNCC) reached out to Bland and other children to get them involved with the civil rights movement. Bland explained that through her activism as a youth, she had been arrested 13 times by the time she was 11 years old.

Bland then focused her words on the physical struggles she endured during her first attempted march on March 7, 1965. She recalls seeing the beatings and hearing the screams of the activists who were being apprehended by the police. Though shaken and hurt from this first experience, Bland persisted with her activism and proved her determination by walking in the successful march led by Dr. Martin Luther King Jr. on March 21, 1965.

Her role in this historical march, along with her other achievements through her life, stand as an example for her that the fight for civil rights needs to continue to be pursued and contributed to by this and future generations.

“I hope,” said Bland. “That there is a generation of people out here that are going to change it once and for all; because we all want the same thing: a fair, just world for everybody.”

Her words functioned as a call to action; she hopes that the youth of today realize their own worth. Bland wants people to realize that the civil rights movement of the 1960s shouldn’t just be commemorated as an important movement in our nation’s history, but as an ever-relevant force that needs great attention and progression from all people.

Ashley Sukhu, a senior at UW-Eau Claire, who was in attendance at the speech, really appreciated Bland’s ultimate message of how necessary proactivity in the civil rights movement is.

“Something that I really like about when Joanne speaks is she always ends her speeches with what you need to do,” said Sukhu. “I think that is such a crucial part of us moving forward as a society.”

This speech is one of the many events involved in UW-Eau Claire’s on campus series entitled,  Risking Everything: History and Civil Conversation. This series of events and exhibits will be ongoing throughout the month of October, and is focused on the 1964 Freedom Summer and civil rights in contemporary society, according to the McIntyre Library’s latest newsletter.

Joanne Bland is welcomed by @UWEauClaire, as she now starts to tell her story of freedom fighting. #CJRE_Bland http://t.co/cOWCt4GOPn

Bland says that to uphold civil rights visions, people need to be taught about the roots of the issues. #CJRE_Bland http://t.co/roPoGUZL4T

The media also needs to be harnessed, with funding, to keep attention on obtaining civil freedom. #CJRE_Bland http://t.co/roPoGUZL4T