Posted on December 7, 2015 by halversonmatt

Hip-hop might not have been what Roy Hargrove was going for when he wrote the jazz standard Strasbourg, however, one local rapper saw a different vision. 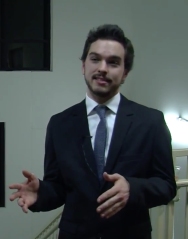 Adam Gumm, a freestyle rapper from Eden Prairie, Minn., is helping to bring a new hip-hop vision to the Eau Claire scene.

In his freshman year of high school, Gumm started exploring new music, and first began to freestyle rap. It started as just a hobby, until one day when he came to Eau Claire to visit his friend, now co-emcee Stephen Sutherland. He learned that a group of Eau Claire musicians was looking to hire a a freestyle rapper. After further inquiry, he found that it was a group of professionally trained jazz musicians out to bring something new and exciting to the area. This group was Doks Robotiks.

The current Doks Robotiks is an ensemble of eight different people each bring a unique element to their music. Gumm is one of the two highlight emcees of the group, along with Stephen Sutherland. They are accompanied by vocalist and flautist Kateri Farrell, trombonist Henry Bergmann, trumpet player Kristofer Bergh, drummer Rick Haneman, guitarist Robert Hagen, and Andrew Bocher on piano. Hagen and Bocher also play percussion on occasion.

“The really cool part about Doks Robotiks for me personally, with myself lacking any form of musical training is being involved with the rest of the guys in Doks,” said Gumm. “They’re all for the most part trained jazz musicians.”

Doks Robotiks is currently based out of Eau Claire, although not all of the members currently live in Eau Claire. Gumm works and lives in Minneapolis, but is frequently in Eau Claire for gigs and rehearsals.

Throughout his time in Doks, Gumm has performed at many venues in Eau Claire, including The House of Rock, The Mousetrap Tavern, and at numerous university events, most recently at The Gatsby Gala in the Davies Center. They have played at UW-Eau Claire on campus dance club The Lookout and on the campus mall. Outside of Eau Claire, they also play frequently in Minneapolis at various bars and shows in the downtown area.

“We kind of view ourselves as a collective,” said Gumm. “So it’s our ability to pull in friends to put their touch on a song and really change it up.”

Gumm especially likes performing with Doks because of the nature of the band. Because all of the members are trained in jazz, members are able to solo and play new tunes with minimal rehearsal, sometimes even with no preparation. One of the most unique parts about the group however, is not the instruments improvising, but rather the rappers.

“I’d like to think it’s my specialty,” says Gumm.

When he first began free-styling, Gumm was mainly focused on imitating some of his favorite artists, like A$AP Rocky, Slug, Eminem, and even Bob Dylan. From there, he began to find his own image as a freestyle emcee.

“It’s kind of like a mosaic with all these different pieces coming together,” added Gumm. “I can freestyle as long as there’s a beat on.”

Even when he is in his car, Gumm is almost always listening to instrumental tracks and running over new lines in his head. He says he occasionally uses “crutch words” to help, but almost never prepares lines before gigs.

“He brings an uncanny like energy to the group,” said Bergmann. “He even calls himself our spiritual leader.”

When he is on stage, Gumm says fans should expect a lot of noise and energy. Bergmann says that Gumm is a talented freestyler with extremely fast lines, even incorporating sixteenth note rhythms into his verses. Gumm also says he tries to leave it all on the stage, and is extremely exhausted after Doks shows.

As far as future performing, Gumm is unsure where he will go, but is content with his musical identity. Doks Robotiks is his only group, but he is currently working on developing collaborations with other groups from Minneapolis.

“I firmly believe that anyone can rap,” he says. “All it takes is practice.”