“Regular radio had done a lot of call-in shows, but a lot of what the call-in shows were in those days were: the host would come on and make some comment and ask people to call in,” explained Kallenbach. “We’ve always had guest-driven call-in shows.”

Rich Kremer, reporter for WPR and host of the weekly call-in program “The West Side,” said that live shows are “unpredictable” but “exciting.”

“You never really know what someone’s going to say,” he said.

This objective of ensuring the show goes smoothly, he continued, is a challenge, but a thrill.

On Monday mornings at ten, Kremer welcomes guests to the radio show in studio or over the telephone, and commences a live discussion on that week’s topic. Volunteers or staff members field calls from listeners outside the studio, ensuring that comments they have will be pertinent to the conversation. 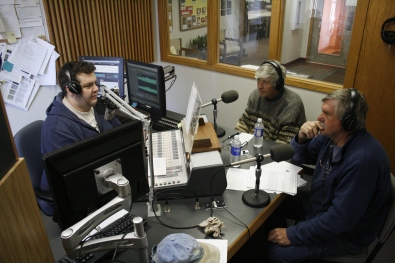 Rich Kremer chats with Outdoor Guys Dave Carlson and Joe Knight in the studio before going on the air. © Helen White 2016

Kremer says the most stressful part of the live broadcast process is trying to book guests. “Once I get into the studio, I’m actually more comfortable, because at that point…people aren’t gong to cancel on me or anything like that.”

Kremer never planned on going into radio broadcast, but is glad to have found himself here, especially in a position that allows him to lead debates and deliberations on
various topics.

“When we have a Republican and Democrat state lawmaker [here]; most people, all they see in the news is these people bickering and fighting,” he said. “You get them in a studio, they’ll disagree with each other but they actually…have a discussion.” 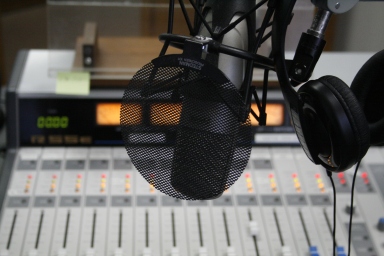 He said that this can give listeners some perspective. “People are so cynical about politics,” he said. “but really they’re just normal people like you and I.”

While he said that a live show is “stressful,” he believes that it’s worth it to get community members and even faraway listeners involved. Recently, WPR started streaming online, so now anyone around the world can listen. Even as this increases his audience, Kremer maintains cool under pressure.

“When we had a lot of great calls, and when I’m able to exit the show without screwing anything up, I like to take a breath,” he said, then added, “It feels like, you know…like an accomplishment.”