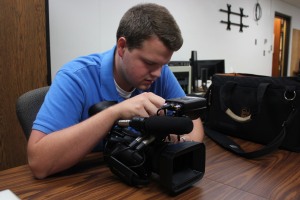 Matt Peterson adjusts the settings on a Sony NX3 camera to prepare it for student use. Peterson is the University of Wisconsin-Eau Claire’s Digital and Broadcast Programs Manager. © 2017 Rachel Schmidt

The person that I shadowed was Matt Peterson. His official title is the Digital and Broadcast Programs Manager at the University of Wisconsin-Eau Claire. He is employed by four different departments throughout the university. Peterson works with Housing, Learning and Technology Services, Integrated Marketing, and Athletics. With Athletics he oversees video for athletics, which includes tv broadcasting and web streaming. With Housing he is an advisor for TV-10 and manages their relationship with other departments. With Learning and Technology Services he works multi-camera video productions, and lastly with Integrated Marketing his job is to help them expand and grow their usage of video, as well as increased student involvement.

Matt is a 2017 UW-Eau Claire graduate and was a member of TV-10 for four and a half years. He was a human resources management and communication studies double major, which took him five years to complete because he decided to add a second major later in his college career.

During his time at TV-10, he held the position of station manager for two years and production director for one year. As station manager his responsibilities included keeping the station running smoothly and managing staff. He had weekly meetings with the TV-10 advisor and led group meetings every Sunday. As production director he oversaw the staffing of live streamed sports events, trained new members, and made sure studio equipment was fully operational.

Other than TV-10, he had the opportunity to gain management experience by working at a summer camp. Peterson also had a summer internship at Securian Financial Group.  They are headquartered in St. Paul and provide insurance services.

Because of his work with live streamed sports during his time with TV-10, there developed a need at the university for there to be someone full time to oversee everything. As a senior Peterson worked with some department leaders to shape the job and hammer out what it would look like. Once all the details were finalized, the job was posted. Then he applied and right after graduation they officially offered him the job. Peterson said he has a passion for multi-camera video production, especially in the athletics setting, and it was cool that he got to see it grow as a program. He started in July but between the four departments employing him he always has something to do.

The top two pieces of advice that Peterson has to offer students pursuing a career in media would be to network and to have a good portfolio. He said that you never know who can help you find a job, so get to know as many people as possible. As for your portfolio, Peterson said that a good reel can say more about you than your resume or an interview can. According to Peterson, if you follow these two pieces of advice you can go pretty far.