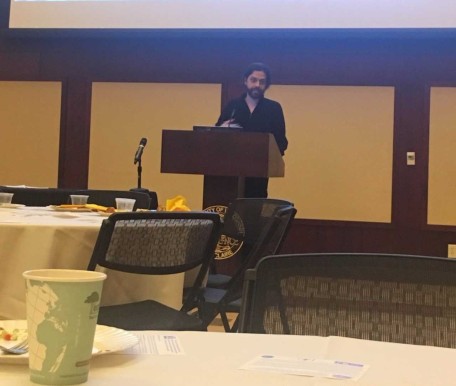 Award winning independent filmmaker Miguel Coyula, of Cuba, spoke last night at the University of Wisconsin – Eau Claire as part of the school’s Latin American Study Week. The Cuba native touched on his start in filmmaking and what has led to his success today.

Some credit his success to his dedication on creating his films with small budgets, which forced him to get the most out of his resources at hand. In fact, Coyula’s first feature story took him two years to complete, but cost him only $2000.

Some credit his success to his early years, where he made his videos completely with VHS camcorders, and no such thing as computer editing.

All these helped him get to where he is now, however, his success should be accredited to his clever mindset when it comes to independent filmmaking.

“To me, if you want to be an independent filmmaker, you need to be willing to take on ideas that can’t be in mainstream media.”

Coyula says this can be hard to do In Cuba, where government censorship limits your options. His way around it?

“I’m not part of the Cuban society. That’s why I’m over here in America showing my films. They can’t limit you over here.”

Coyula said he made the decision to remove himself from Cuban society after a film he made caught the attention of the Cuban government. A subject Coyula interviewed in the film was critical of former Cuban leader Fidel Castro, leading to the government keeping close tabs on the filmmaker.

“You have to be willing to pay this price, but it’s worth it because you are happy doing what you do.”

One person who wasn’t willing to pay the price was one of Coyula’s music producers for the film. He was ordered by his boss to write an appeal letter to the government, otherwise he would lose his job. Coyula shared with the crowd of roughly 75 people that this letter stated he did not allow Coyula to use his music.

“We had to sneak into the back side of this building once, avoiding the guards out front. But it’s worth it to get the shots you need for your film.”

“I was very impressed by how much dedication he puts into his work…even with all the dangers associated with making his films, he stated he feels like he needs to do it. I think that’s very admirable.”

Leavens didn’t stop there, as the high praise for Coyula continued when he was asked what he enjoyed most of the short films.

“I enjoyed his explanations of how he edited his films and did all of his visual effects. It was cool to see how his shots started and how he finished them.”

Coyula wrapped up the presentation by telling the group that he is currently working on another film, a sci-fi film, which has been in the works for five years now. When asked what’s next for him, Coyula said he is only focused on finishing his current work.

This entry was posted in Uncategorized. Bookmark the permalink.