Posted on October 20, 2018 by madelinefuerstenberg 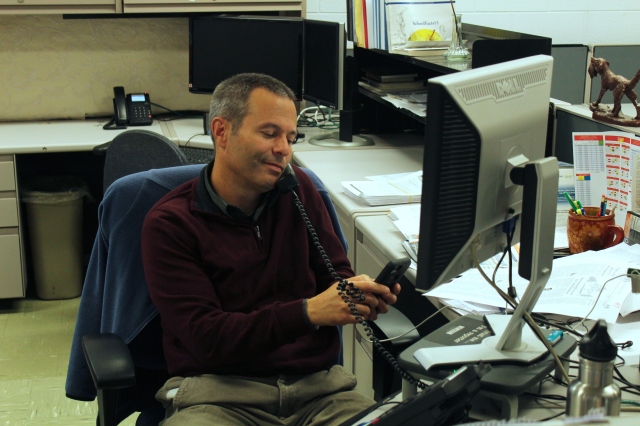 Julian Emerson said all future journalists should be adept in multitasking, as journalism can often be a chaotic career field. © Madeline Fuerstenberg 2018

r weekly paper in Arcadia, then one in Chippewa Falls. Emerson followed these brief career moves with a two-year run as a freelance writer for various newspaper publications in the region. Finally, Emerson was hired at the Leader-Telegram, where he has remained ever since.

Some of Emerson’s responsibilities include conducting interviews, searching for new story ideas, doing research, writing a weekly blog post and editing. As a part of his weekly routine, he makes phone calls to sources, writes promotional blurbs on the daily paper’s side rails and takes potential news tips from local readers. When pursuing a story, Emerson travels to various locations for interviews, research and other investigative endeavors. Having varied and unpredictable hours, Emerson said he must work hard to balance his professional career with his personal life. This includes maintaining a balance between his journalistic integrity and his wife’s political aspirations. Emerson is also using his free time to help coordinate an event as a part of the “Beyond the Headlines” series.

While Emerson admitted that journalism can be a challenging, time-consuming career path, he also said it is a very rewarding. As Emerson has been with the Leader-Telegram for over two decades, he argued that he has made a name for himself in the community. After working with and mentoring numerous journalism students over the years, Emerson said he now likes to advocate for “making journalism what you want.” In other words, Emerson said he likes to push young journalists to step outside of the box and find their own niche in the journalism world.