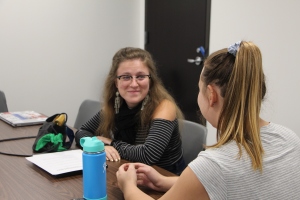 Rachel Iaquinta works with a resident. It is her first year as a hall director for Karlgaard Towers. © Emily Shepardson, 2018Hall Director begins journey in a newly renovated hall

Working in student affairs is no easy task. As a hall director for the University of Wisconsin Eau Claire, Rachel Iaquinta says that there really is no typical day. I job shadowed Iaquinta, who is the hall director for Marilyn Karlgaard Towers South this year.

She and I met on Thursday, September 27 for several hours and discussed how she began her career in student affairs. Iaquinta was a resident assistant in Oak Ridge Hall here at UW-Eau Claire from 2013 to 2016. After graduation in 2016, she was hired to be a graduate assistant hall director for Bridgeman Hall. While working as Bridgeman’s hall director, Iaquinta received her master’s degree in social work online from the University of Wisconsin Madison.

This past year, Iaquinta was hired as the hall director for the newly renovated Marilyn Karlgaard Towers South. Iaquinta explained that the construction is a work in progress, but residents of Towers are happy with the new amenities, such as an air conditioning unit in every room and redone bathrooms.

Now housing 630 residents, Towers South is home to mainly first year students, which is also a new adventure for Iaquinta. While learning the ropes of a new building has been challenging, Iaquinta said she is so happy to be in Towers.

Iaquinta explained that a large portion of her job is spent in meetings. On a weekly basis she does everything from running conduct meetings to training Living Learning Community leaders. She also is responsible for reporting on how the hall is doing, from community development plans to intentional community building opportunities.

Iaquinta recommended that anyone interested in being a hall director should start by getting involved with campus as a student. She explained that being a part of hall council or applying to be a resident assistant are great resume builders.